get inside the mind of a machine (IBM Cognitive Computing here next week!) 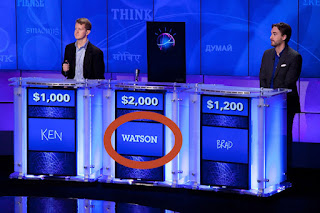 Yeah, that's Jeopardy! The guy on the right? The 2nd best champion ever. The guy on the left? The uber-champion brainiac that no one could ever beat, no matter what. The "guy" in the middle? IBM's cognitive computer, Watson. He smoked them both. It was kind of sad, actually–the ultimate triumph of machine over human, at least in the knowledge recall game, but it was amazing, indeed, and now you can learn how Watson thinks & what new amazing stuff it does–from the experts. (Free! On campus!!)


Here's a chance to just walk across campus and learn about AI (the real thing) and IBM's Bluemix, their cloud platform that brings together all their cutting edge technologies (Watson, included). On top of that, our IBM liaison, Nanci Knight will be there handing out Promo Codes for 6-months free access to Bluemix (including the Watson APIs) to any student who attends.

But, you have to RSVP by sending an email to kimberly.boudreaux@sjsu.edu (and don't be a no-show. That's so rude!)

Details below. Check it out and post comments back here next week!

You are cordially invited to a 2-hour seminar on Cognitive Computing, Watson & Bluemix, presented by IBM experts. Be part of the growing conversation as we explore the powerful cognitive technologies that are emerging to augment human capacity and understanding.

"Navigating the Cognitive Era" Richard Rodts - Program Director, IBM Watson Academic Programs Abstract: IBM point of view on the growth of data and the role of cognitive computing to assist in making sense of that data.

"A Cognitive Journey through the Lens of IBM Watson" Armen Pischdotchian - Watson Academic Partners: Technical Mentor for Universities - IBM Watson Group Abstract: A world of sensors and devices that communicate with one another often analyzing data and predicting futures, are about to meet cognition; where systems understand, reason and learn. Come for a journey beginning from the Jeopardy! days to API services that employ neural network deep learning technologies as we usher in the cognitive era.

"Working with IBM Bluemix: Building Apps Augmented with Cognitive Services" - hands-on demo Armen Pischdotchian Abstract: In this demo, we build an app and bind it to three services: Personality Insights (PI), Question-Answer and AlchemyAPI service. This workshop tells the story of a frustrated author who is under stress. Using character traits revealed by the PI service, the analyst poses health related questions to the Watson health corpus and, at the same time, extracts keywords (AlchemyAPI) from the returned answers that may prompt the analyst to query further using the DeepQA pipeline (QA service).
Posted by Professor Tim Hill at 9:04 AM