And I thought MY iPhone 6 was big! Take a look at the one behind the Salesforce dude! (Guess that's the 6 Plus, Plus.)

A couple of weeks ago I finally made it to the Salesforce annual users' conference, Dreamforce, for the first time and came away with a few pics of the madness, some random impressions and some hopefully noteworthy takeaways–

First, these events really are totally mad. They had 125,000 people show up for the thing. San Francisco was crawling with them everywhere. Rooms at hotels like the Hilton were going for $800/night, minimum. Uber was charging triple. Bruno Mars & will.i.am played one night but I was too worn out to care by then.

But I got it. Salesforce is a formidable force, indeed, and sure seems to be on a big, big roll. I saw where they were putting up what will be the tallest building on the west coast a couple of blocks from Moscone. Not surpirsing really, given their momentum. Worth keeping a eye on for sure.

Big emphasis on Internet of Things (IoT) too. All kinds of demos of “things” integrated into the SF platform. Loved this inspection robot, for example:

I love how it seems like some kind of animal or person, craning their neck to get a good look here and there.

The major Salesforce announcement was Wave, their new data analytics tool. They played it up with a tropical theme and had the Beach Boys play during the keynote when they unveiled it–

It does look really cool–the name comes from how you can switch to different visualizations of the same data & the columns of the bar chart, for example, slide over and morph into the segments of a pie chart, or whatever. Guess you have to see it.

At one point, one of the speakers ordered a Coke on his phone and the video screens showed a guy in Coke's SF distribution center attaching some cans to a drone. The video showed the drone fly out, down Market Street, into Moscone, down the escalator and then the doors burst open and the drone flew over our heads and delivered the Coke to the guy on stage. Crazy.

Later on I saw how to create apps for Google Glass. While we watched, they coded one for a company that makes high-end label printers that businesses use. The app would be used by repair guys. When they looked at the serial number on the back, Glass would read it, look it up in the database and use the features & history show them stuff while they were working with both hands. Pretty nifty.

Coolest thing was the Occulus Rift, though I didn't get to try it out myself. (Line was too long–rats!) Anyway, in the pic you can see a couple of people sitting there wearing the goggles, manipulating the virtual 3-D globe in front of their eyes. The screen shows a 2-D version of what they're seeing - some kind of customer demographics fed from Salesforce that they could explore by turning and touching the globe. I want one. Now. 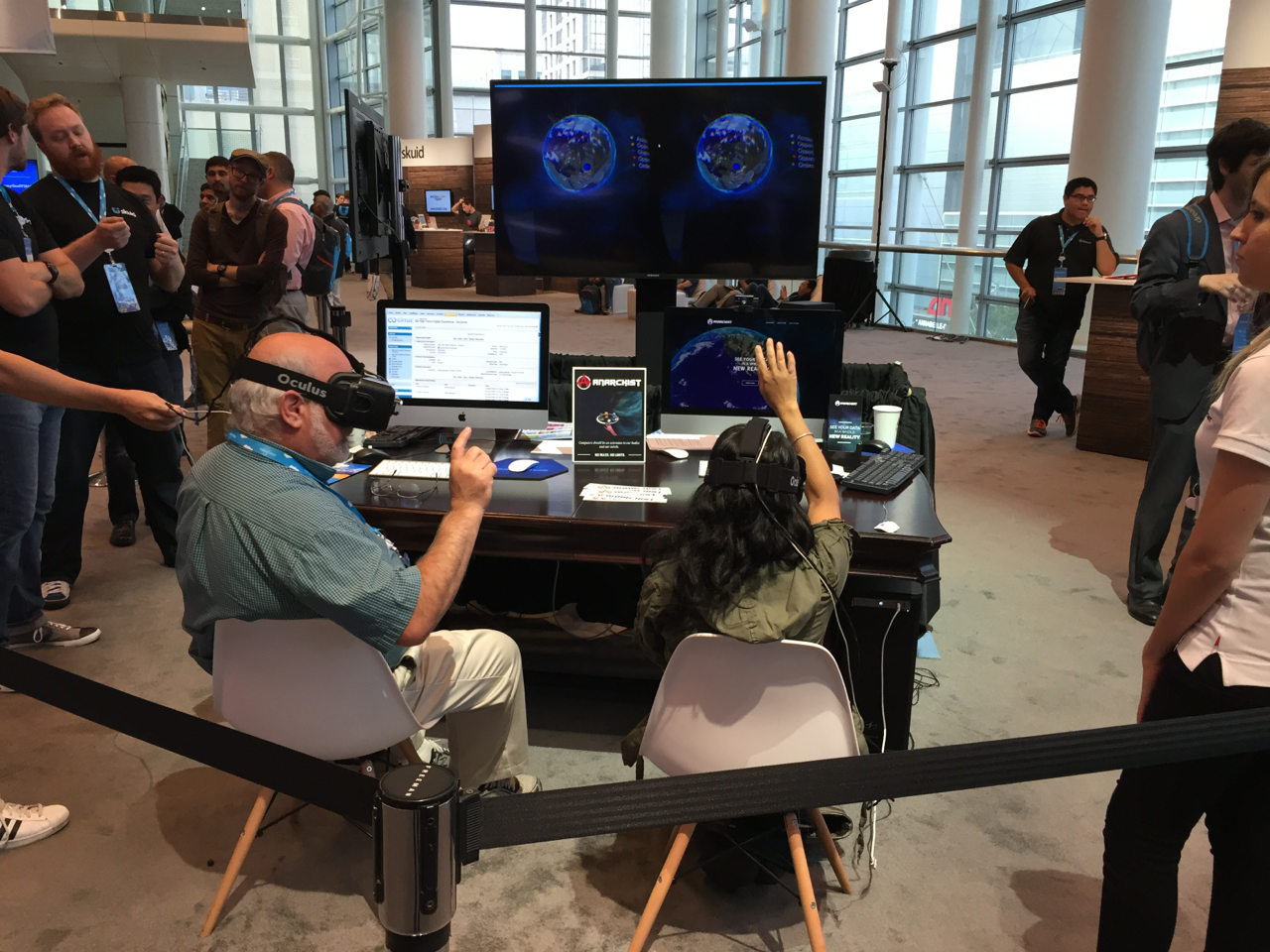 There were something like 2000 sessions over the 4 days of the conference. I missed one or two. But I saw some that were super-useful & learned a ton. One of the best was on the current state of the “social business” trend. Salesforce is big on this–they've integrated this “Chatter” feature that lets you create a discussion with your colleagues on any record or field in the database, so you can get fast advice, buy-in, etc from your team on the price that you're negotiating with a customer on one of your products, for example.

Anyway, the guy presenting the social business trends session was Alan Lepofsky. He works as a consultant at Constellation Research in Toronto. I learned a ton from him in like 50 minutes so you might want to check out his blog where he recently posted a much more detailed and informative reflection on Dreamforce takeaways. Looks like there's a lot of other good stuff there so check it out. He did post his slides from the talk which you might want to browse if you're interested in social media at all:
Dreamforce 2014 whats next in social business from Alan Lepofsky
Bottom line–this took a big chunk out of my schedule and put me way behind on work, sleep, etc from which I'm still recovering, but it was totally worth it cuz it was mind-boggling, crazy, memorable and a really valuable experience. If you went too, post your takeaways here. If not, think about going to these kinds of events. There's a bunch around here and they almost always have free passes that let you in to a lot of the stuff so you can still learn and have something cool to talk about in a job interview. I'm tellin ya.
Posted by Professor Tim Hill at 8:58 AM