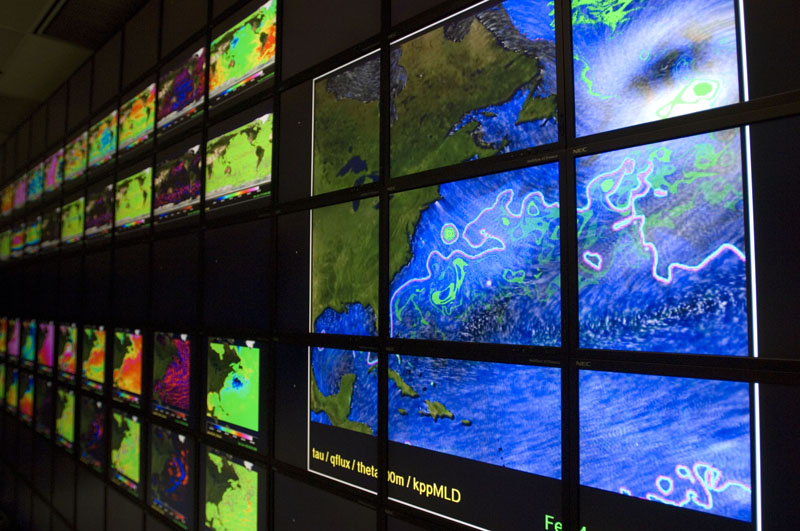 This week I heard from one of our star former MIS students, Adam Nudelman. Like other good alums often do, he's trying to give a hand to the next generation so he asked me to spread the word about a super-cool opportunity for a job where he works...which just happens to be about the coolest place you could ever hope to walk into–the NASA Advanced Supercomputing Facility.

In the pic, you see what they call the hyper wall which is an array of displays driven by the supercomputer. I got a chance to go there once for a demo by one of the rocket scientists (seriously, a real rocket scientist) and I'm telling you it was utterly unforgettable. He explained brilliant, amazing things in a way even I could understand and, I'm serious, it was life-altering. Anyway, YOU could be there, hanging out with those guys and their amazing stuff. (We've had a bunch of students go there over the years.) Read on...

Adam said there are currently 2 full time job openings for the position of "Control Room Analyst" / "Security Operation Center Tier 1" (one job opening is for the 2PM to 10PM shift and the other runs 10PM to 6AM). He says "As always we are aiming primarily MIS students since they both have the technical knowledge and social skills."

He goes on to give some really helpful details:

Note: Unfortunately, you HAVE to be a US citizen to be considered. They're not happy about that but it's a strict government rule for NASA and there's no way around that. Sorry.
Posted by Professor Tim Hill at 10:13 AM