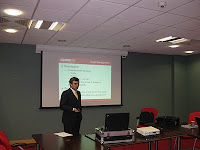 So here's the story - we have this alum (not the guy in the picture) who graduated back in the 60's who then started his own shipping company in Asia with $1000 and which is now called Crown Worldwide Group with revenues of over half a billion dollars. Yeah, I know!

His name is Jim Thompson and besides being a super successful businessman,  he's also a nice guy. So among other nice things he's done, he created the Thompson Global Internship Program by which SJSU business students get to travel (all expenses paid) to do a 3-week internship (paid) at one of his corporate offices somewhere around the globe. Yeah, I know! 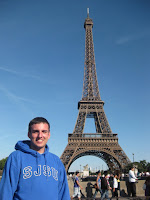 So far some of our students got to go to Hong Kong, others to Kuala Lumpur and the picture is our own MIS Association president, Richard Bartmess, presenting his team's project at the London office. Yeah, I know! After the internship, he ran around Europe for a few weeks having fun as you can see in the other pic. (In fact, we almost overlapped in Italy. Crazy!)

So what have we learned? A) Work hard in your classes so you can get good grades and apply to the program and travel the world. Next opp is coming in January during winter break. Check the TGIP web page for details on applying. B) Jim Thompson is a great role model for you, not just in terms of success but also giving back to later generations. Don't forget! C) Richard Bartmess had way too much fun last summer. Yeah, I know!
Posted by Professor Tim Hill at 10:13 PM