fascinating radio show about a movie about SV VC's 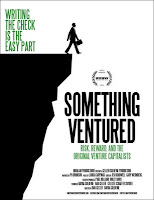 Last Friday, as I was driving to campus, I tuned in KQED's Forum show on the radio and was totally captivated. They were talking to a couple of filmakers about an indie documentary called "Something Ventured" that explores the history of venture capitalists in Silicon Valley. They told amazing stories of Steve Jobs, etc. that they got from interviewing the insiders, a couple of whom were also live in the studio as part of the radio show. Fascinating stuff. After I parked, I had to stream the show onto my iPhone so I could hear the end as I walked to the building–I didn't want to miss a single minute.

I really want to see the movie, which is part of the SF International Film Festival but there's only one more screening, this weekend up in SF and I can't make it. I'm going to look into buying the DVD though, with rights to show it in the classrooms.

In the meantime, I urge you to listen to the recording of the radio show I heard which you can find here at KQED's site. If you have any interest whatsoever in how this singular phenomenon of Silicon Valley came to be, you'll be captivated as I was.
Posted by Professor Tim Hill at 7:57 AM