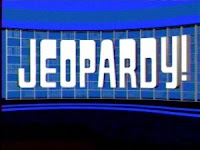 So this looks like fun - IBM has created a machine (named "Watson") they claim is capable of playing Jeopardy!, the actual TV quiz show, including understanding natural language and the show's "here's the answer now what's the question" format. In fact, they say it's more than capable of playing, it can beat the all time top human champions at the game! Check out these vids on the Jeopardy! site.

So it's on TV, during the regular Jeopardy! slot, with the final championship this Wednesday (2/16) and the MIS club (MISA) and IBM are sponsoring a free party on campus for everyone who wants to watch together in the Engineering auditorium (189), 6:30pm to 7:45. They're providing food, etc. and raffles for IBM swag plus you can meet IBM people. (Though they're not really recruiting it never hurts to expand your professional network.)

Should be interesting...similar to when they created "Deep Blue," the computer that beat the world chess champion Kasparov in 1997. But of course, playing Jeopardy! is much harder, much less structured and requiring all kinds of knowledge & understanding. Kind of another historic moment in the co-evolution of man & machine. Worth catching if you can. I gotta root for the humans (projecting ahead based on the Terminator movies).

If you want to go to the party, you need to email the MISA president so they'll have the right amount of food: president@sjsumis.org.
Posted by Professor Tim Hill at 4:27 PM